Actor and writer Larry Vanderveen assumes the role of legendary novelist F. Scott Fitzgerald in a powerhouse one-man show exploring the life and times of the man who penned such classic American novels as The Great Gatsby and This Side of Paradise. From his troubled relationship with devoted wife Zelda to his later romance with Hollywood gossip writer Sheilah Graham and his complex friendship with acclaimed author Ernest Hemingway, this rich and textured exploration of Fitzgerald’s eventful life allows literature fans the unique opportunity to look into the mind of the man responsible for some of the greatest literature of the 20th Century.   Jason Buchanan

Should Be Required:   High School and College instructors should play this for their students before beginning a Fitzgerald novel or story. (It would’ve been nice to have more about his short stories.) I’ve read everything he wrote and nearly everything written about him over the past 30 years, and was astounded that Mr. Vanderveen could compress so much valuable information into 84 minutes…it seemed to go by in a flash yet I had a great feeling of satisfaction when it was over. Mr. Vanderveen knows how to separate the important points from the piddly things that some biographers wallow in, while retaining the essence of the man, his suffering and his creative genius. And I liked the fact that there was no audience-reaction track…Mr. Vanderveen seemed to be speaking directly to ME. sep.

“After Larry’s performance I was told that several people stopped to comment as they were exiting the library, saying that this was one of the best programs we had ever presented. That alone, is a wonderful compliment, and a good indicator about the quality of the performance. But the fact that one patron took the time to call the next day and let staff know just how much they had enjoyed their evening and hoped that there might be a repeat performance one day – well, that is a rare compliment indeed! And a well-deserved one.”

At the South Pasadena Library 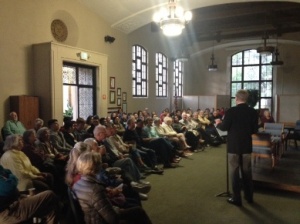 On behalf of the Library, the Friends of the South Pasadena Public Library and the Living History Centre Fund, thank you for your amazing performance as F. Scott Fitzgerald in the community room. You were captivating in bringing F. Scott Fitzgerald alive for those already familiar with his life work, as well as those just becoming acquainted.

Attended a live performance by Larry Vanderveen at the South Pasadena Public Library. Approximately 160 individuals attended and about half of them were high-school students from South Pasadena H.S. Bottom line–they loved it. A ninety minute monologue can test anyone’s patience. That said, Mr. Vanderveen held their and my attention the entire time and gave us an amazing inside look at the complexities of a remarkable 20th Century writer, warts and all. Highly recommended.
Steve Hodel, NYT Bestselling author, Black Dahlia Avenger: A Genius for Murder.

At the Thousand Oaks Library

“This was a fabulous show.  Mr. Vanderveen also wrote the show. “Wowed” is right!”

It was a wonderful show. Thank you so much. Our patrons loved you!
Jana

At the Simi Valley Library

At top, Faith David of Westlake Village and other audience members laugh, while playwright and performer Larry Vanderveen delivers his portrayal of late author F. Scott Fitzgerald at the Simi Valley Public Library. Vanderveen’s one man show incorporates some of Fitzgerald’s own writings and quotes.
Photos by RICHARD GILLARD Acorn Newspapers

Comments from Simi Valley patrons after being treated to Mr. Vanderveen’s performance of Meeting F. Scott Fitzgerald:
“He was amazing!”
“He was wonderfully entertaining.”
“What a great performance.”
“Well done!”
“He brought Fitzgerald to life in an insightful and entertaining way.”
“This was live theater at its best!”
“You’ve made me want to read a Fitzgerald biography.”

Larry, your portrayal of F. Scott Fitzgerald and a glimpse of the people who inhabited his world was very informative and entertaining. A library is the perfect setting for this performance. Thank you for bringing such an iconic literary figure to life in our community.

At the San Bernardino Central Library Larry Vanderveen’s one man show “Meeting F. Scott Fitzgerald” was one of the best library shows we have hosted! An audience of 130 on a Saturday afternoon is always amazing, but the fact that the audience was so enthralled that you could have heard a pin drop, makes it even more of a success.
Larry’s writing and acting are superb, entertaining, and informative. We already have requests to bring him back next year.

At the A.K. Smiley Library in Redlands

“F. Scott Fitzgerald has been one of my favorite authors for many years, but nothing has made him come alive for me until Larry Vanderveen’s one man show.  Outstanding.”

“How wonderful to spend the afternoon with one of my favorite authors.  Larry Vanderveen’s masterful presentation brought Fitzgerald to life.  His moving insights into the ages and stages of Fitzgerald’s life were most impressive.  His underlying, undying love for Zelda touched my heart.  Vanderveen is a superb actor, in a one-man show not to be missed. Thanks you for this exceptional program.”

“Larry Vanderveen gave a first rate performance as F. Scott Fitzgerald at our library.  The character really came to life, giving us a deeper understanding of what shaped this giant of western literature.”

At the City of Camarillo Public Library 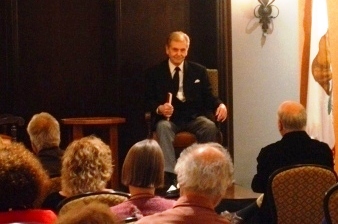 Thank you again for your wonderful presentation at the Camarillo Library.  It was truly engaging and provided fresh insights into the author’s life and times. We had so much positive feedback from the audience who were impressed with your performance as well as the amount of research that you have done about Fitzgerald.

At the The San Pedro Public Library

When actor/director Larry Vanderveen appeared on stage at the Grand Annex, he looked like a model for the artist J. C. Leyendecker. Vanderveen’s biographical portrayal of F. Scott Fitzgerald was amazing. The audience members heard everything from his childhood, his parents, his college life, his wife Zelda, and the many famous friends, colleagues, and professionals he knew from Paris to Hollywood. As Fitzgerald, Vanderveen talked about his writing, his travels, the parties, the boozing and all manner of extravagance that made him an early 20th century iconic figure. To an average person it was like a dream about the Roaring Twenties. The audience was mesmerized by Vanderveen’s performance. Though the performance was long, no one left until it was over. When he returned to himself after the performance, he talked about how he gathered the information for his portrayal, and it was then that we realized the scholar he is. His research produced all the details that brought Fitzgerald to life.

Article and photo by Yumi Yamamoto 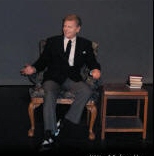 A loving portrait of writer F. Scott Fitzgerald revealing his human frailties and deep heart, “Meeting F. Scott Fitzgerald” presents the wistful, tragic life of  the writer through the sharp eyes and portrayal of playwright/performer Larry Vanderveen.  Skillfully weaving events throughout Fitzgerald’s tumultuous and short life, Vanderveen demonstrates the generous and emotional soul of Fitzgerald through the device of the novelist speaking to a Los Angeles literary club in December 1940.  Vanderveen, dressed impeccably in spats and double-breasted suit, elegantly captures the melancholic soul of Fitzgerald, intensely revealing the emotion and ironic humor as the long suffering but now sober writer.  He wonderfully portrays Fitzgerald’s wounded but resilient spirit.

His writing is also first rate, blending comedy, tragedy, irony and hopefulness to reveal Fitzgerald finding peace and a hard won maturity.  He employs the novelists own words and quotes from other intimates to present a well rounded view of Scott and Zelda’s roller coaster marriage, daughter Scottie’s lonely life, and Fitzgerald’s tragic drinking and waste of  his life.  Vanderveen demonstrates great compassion in his description of a man finally coming to terms with his talent and life, making amends for his wrongs and attempting a graceful comeback.  An informative, entertaining and emotional stroll through Fitzgerald’s life, Meeting F. Scott Fitzgerald superbly reveals the heartaches, frustrations, and successes of one of America’s greatest novelists.

A moving and incisive portrayal

By Volunteer of America VINE VOICE
Larry Vanderveen performs a brilliant one man show as he smoothly assumes the persona of F. Scott Fitzgerald.Elegant in a well cut double breasted blazer, perfectly creased slacks and pristine white shirt and pocket square, Vanderveen as Fitzgerald reflects on his life and work.Vanderveen’s gentle recital, effortlessly moving from irony to comic reminiscence to deep regret, conveys a superb impression of the brilliant but tragically star-crossed writer. Honest and unsparing of himself, he describes the struggles to succeed with his books – never truly fulfilled during his life – his terrible struggles with alcoholism and, most poignant of all, the beautiful, self destructive, doomed Zelda.Vanderveen’s tone and expressions never pall; this is very well worth watching.
Poignant and inspiring
By Progressive

It’s true that this production is not a year-by-year recounting of Fitzgerald’s life, but if you are looking for that read Wikipedia. I totally disagree with the reviewer who says this is not for students. Unless your goal is to have your students know the author’s birth and death years, his principle works, and nothing about what made him tick. This is, in my opinion, a VERY insightful, moving piece of dramatic theatre, which provides a deep look into the man’s often lonely thoughts and emotions. For example, when he talks about Ernest Hemingway. Frankly, the other reviewer’s comments sum up a lot of what is wrong about today’s education; boring facts are emphasized over inner, perceptive truths, which needless to say tell you a great deal more about what has real significance.
CLICK THE LINK BELOW TO LISTEN:

This site uses Akismet to reduce spam. Learn how your comment data is processed.

Click the photo to listen to “Preparing to write Meeting F. Scott Fitzgerald.”